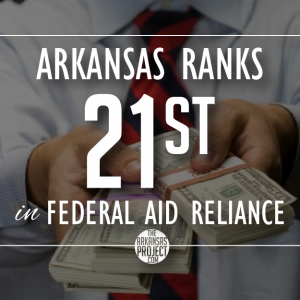 According to this study, Arkansas gets 34.5 percent of its general revenue from the federal government, about 3 percent more than the national average.
The good news from the study is that, among our neighbors, Arkansas is tied with Texas for being the least reliant on federal aid.
The bad news is that this study uses data from fiscal year 2012, so it doesn’t include Arkansas’ recently-enacted “private option” Medicaid Expansion program, which is largely financed on the backs of federal taxpayers. Hilariously, this is what is called, in some legislative circles in the Capitol, “free money.” Arkansas and other states will face increased reliance on the federal government in future years, due to decisions to expand Medicaid.
However, according to the Cato Institute, the federal debt is expected to be $26.5 trillion in the next ten years, so it’s pretty clear that states should be trying to become less reliant on the federal government.
Medicaid expansions make states more reliant on the federal government at a time when they should be looking to become less reliant.