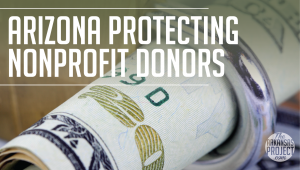 There is a move afoot to stifle political speech. Some people want to see mandatory government reporting for nonprofits that talk about public policy issues. This is a movement that is being pushed in states around the nation, including Arkansas. It remains to be seen if the anti-speech activists will be successful in this state. In Arizona, however, there was a victory in the opposite direction — the forces that favor freer political speech just scored a win.

A little over a year ago, I wrote a report for AAI about a bill introduced by state Rep.

Clarke Tucker (who is now running for Congress). Here is how AAI’s then-president Dan Greenberg described the threat posed by Rep. Tucker’s bill:

This bill puts the privacy of supporters of the Advance Arkansas Institute (and other nonprofit organizations) in jeopardy. The bill requires mandatory government reporting of the names and addresses of donors to nonprofit advocacy organizations.

Among other problems, this proposed legislation would not only stifle political speech, but would also regulate much more than campaign speech. It would lead to harassment of and retaliation against donors. HB 1005 tramples on the right of every Arkansan to be able to participate in public discourse without fearing that he or she will be targeted for harassment. The harm this measure would cause to the state’s political process will be balanced by no real benefit, since the measure would do nothing to increase accountability for politicians.

Legislators appeared to recognize the problems posed by Rep. Tucker’s bill, and killed it in committee. His legislation was very similar to a ballot initiative proposed by the group Regnat Populus. This group talked a big game in 2016 about collecting signatures to place a constitutional amendment restricting political speech on the ballot. The group, however, failed to meet the state’s deadline to turn in those signatures.

While efforts to limit Arkansans’ ability to support speech about politics have not gone anywhere, neither has there been any positive legislative action to protect such speech in the state. That stands in contrast to Arizona, where Governor Doug Ducey recently signed a bill that prohibits local governments from demanding nonprofits that speak up on political issues report their donors. The Goldwater Institute, a free market think tank in that state, took the lead in fighting back against cities who enacted such mandatory reporting. Here is what Goldwater Institute President and CEO Victor Riches said about the Arizona bill:

There has been an unfortunate trend across the country of cities enacting ordinances designed to limit free speech rights. However, Arizona has taken an important step in bucking this trend. Thanks to this legislation, Arizonans don’t have to worry that they could be subject to persecution because they choose to support a nonprofit organization. They can be confident that their First Amendment rights are protected.

As I noted on TAP recently, Arkansas does not score highly when it comes to allowing people to use their money to participate in the political process. Perhaps legislators should look to Arizona to ensure that Arkansas is doing all it can to allow people to work through nonprofits to have a voice on public policy issues.