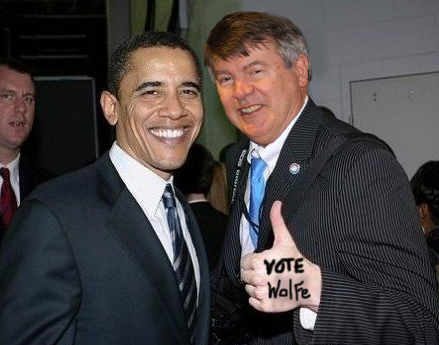 No, no, not that wolf pack–the pack of supporters of John Wolfe Jr., Barack Obama’s Democrat challenger in last week’s Arkansas primary.  Make that 42% of Arkansas Democrat primary voters, to be exact.

Wolfe made national political waves by winning 29 of the state’s 75 counties, according to Breitbart.com.  Just days before the election, he was polling within 7% of the president.

Then, suddenly, just before the vote, the Democratic Party of Arkansas announced that Wolfe would not be eligible to receive any delegates, per national party dictates.  Spokeswoman Candace Martin told the Associated Press:

“The national Democratic Party has informed us that Mr. Wolfe isn’t a candidate who’s been participating in good faith. He’s been completely noncompliant with the Arkansas delegate selection plan.”

Wolfe missed deadlines to certify an authorized representative for his campaign in the state and to provide a necessary statement of participation to the state party, said Martin, adding that his delegates would not be recognized at the national convention.

Now, Wolfe is making national news again, filing a lawsuit against the state party last Friday.  He claims that his constitutional rights have been violated and that the 67,000+ Arkansas voters who supported him have been ‘disenfranchised.’

Wolfe also argues, according to FoxNews, that he was not informed of the requirements for the extra documentation when he gave the party his $2,500 registration fee in March and that the party’s acceptance of his fee implied that the paperwork was complete.

In an interview with Talk Politics, Wolfe made one particularly poignant remark:

“Yes, the same party that is suing states for requiring that voters have ID won’t honor the choice voters make at the ballot box.”

Now, I am no legal scholar, and obviously there are some details of this story that I do not have access to.  But I do tend to think that ‘disenfranchisement’ is a term that gets tossed about a little too freely–or, perhaps, a little too selectively, as Mr. Wolfe indicated in his comment.  There must be some reasonable process (determined by the political parties) for qualifying to receive delegates.  If Mr. Wolfe did not follow that process, then, in my estimation, he should not be awarded delegates.  And as far as I can tell, no one was denied the right to vote or even the right to vote for Mr. Wolfe.  If that evidence exists, I would love to see it.

And now we’ve come to the part of the article where you’re expecting some grand philosophical conclusion, or a deep intellectual question about public policy or good governance.  Sorry to disappoint you.  This is simply fantastic political theater, and as a devout political nerd, I could not leave it unmentioned.

My only question is:  why couldn’t Vermin Supreme get this kind of traction?  After all, our very salivation is at stake.