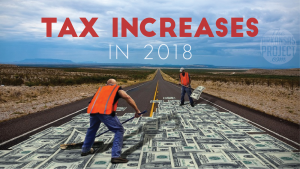 If at first you don’t succeed, try, try again.
That seems to be the motto of some elected officials and special-interest groups when it comes to raising your taxes to fund highways.

A little over a year ago the legislature (and Gov.

Asa Hutchinson) found a way to increase funding for highways without raising taxes.

Now the plan is to increase funding again — by adding a 6.5 percent sales tax on the wholesale price of diesel and gasoline. This same plan died in the previous legislative session. However, it is being revived again to try to place it on the ballot in 2018 before voters.

Hutchinson endorsed the plan today in a speech to the Arkansas Rural Development Conference.

We didn’t get it through this session of the General Assembly. In my view, we need to bring a highway plan in 2018 and put it on the ballot and give the voters an opportunity to develop a highway plan. I hope that you all will be open to that. I know there’s some groups that are working on that. I’d like to see the same plan that was presented to the General Assembly and narrowly did not get out … be presented on the ballot and give the voters that opportunity to vote on that plan.

Even though we’ve enhanced our highway funding with $200 million more in funding with the federal match and what we’re doing, we still need to have more for a long-term highway plan.

To my knowledge, no group in favor of this has begun collecting signatures to get it on the ballot. The deadline to get an initiated act on the November 2018 ballot is next July; that would require the collection of 68,000 signatures of registered voters.

Here and here are copies of bills that make up the plan Hutchinson wants voters to have “an opportunity” at passing in 2018.