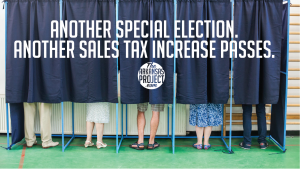 It looks like many local politicians are making it a habit to pass tax increases via special elections in August.

This year it was North Little Rock’s turn, as voters passed a one percent sales tax increase yesterday by a margin of 2,786 to 1,925.

That’s a whopping voter turnout in North Little Rock of around 12 percent.

So if you’re becoming increasingly paranoid that these special elections are being scheduled on dates to receive the lowest amount of turnout possible, yesterday’s results will do nothing to dissuade you from this belief.

I’m not a resident of North Little Rock, so I won’t editorialize on whether the sales tax increase was needed. However, it’d be nice if these special elections were scheduled on dates that the average citizen associated with going to the polls to vote.

Reforming these kinds of elections was considered during the legislative session held earlier this year.

It looks like local politicians will be able to continue to schedule these special elections on odd dates until the practice is stopped by the legislature.