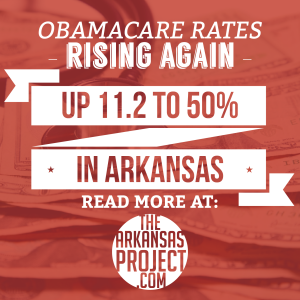 It’s almost time for another round of Obamacare health insurance rate hikes in Arkansas.
From the Washington Examiner:

In Arkansas, where the average increase was 11.2 percent, some consumers could see their premiums soar by 50 percent.
Defenders of Obamacare argue that rates typically went up annually before the law went into effect.
However, it’s important to keep in mind that it was Obama himself who repeatedly promised that premiums would go down by an average of $2,500 per family. His promise wasn’t that he would overhaul the health care system so that premiums would continue to increase each year, just as they did in the system that existed before he was elected, which he argued was unacceptable.
Additionally, any increases in premiums in 2015 will be on top of the premium increases that occurred during 2014.
For instance, Covered California announced last month that the average statewide increase in premiums would be 4.2 percent in 2015. But the Los Angeles Times reported that the state’s insurance commissioner, Dave Jones, said residents of California have paid between 22 percent and 88 percent more for health insurance in 2014 than they did last year, before Obamacare’s major provisions went into effect.
Premiums have been facing upward pressure because the health care law imposes a raft of new regulations on insurance policies, shifting costs of covering older and sicker Americans onto younger and healthier individuals.
And the longer-term challenge facing Obamacare is that a number of the measures intended to stabilize the growth of premiums in the early years of the law’s implementation are scheduled to expire after 2016.

Here is a chart of all the requested health insurance rate increases in Arkansas, broken down by company.
Approximately 45,000 Arkansans holding individual policies from Arkansas Blue Cross and Blue Shield could see rate hikes of 16.5 percent. About 32,000 Arkansans holding transitional policies might see rate hikes of 15.7 percent, according to the Arkansas Insurance Department.
It’s just one more example of the complete disaster that is Obamacare in Arkansas.
UPDATE: The page I linked to about requested rate increases mysteriously disappeared after my post went up earlier today. I’ve e-mailed an Arkansas Insurance Department spokesperson to try to find out why.
UPDATE II: Apparently, an Arkansas Insurance Department official told David Ramsey of the Arkansas Times “we have posted no such information…we don’t know where these numbers originated” regarding the statistics from the Washington Examiner article about upcoming rate hikes for Arkansas. The only problem with that explanation is those statistics were posted on this page as recently as earlier today before the page was mysteriously taken down. Unfortunately, I didn’t screenshot the page before it was taken down.
UPDATE III: The Arkansas Insurance Department (AID) has now changed their story. AID did finally admit the page existed once upon a time. AID spokeswoman just e-mailed me to say the page’s statistics were “not correct,” was posted “in error” and removed. Not exactly a great day for the folks at AID. I’ve sent the spokeswoman a follow-up e-mail for further details.
UPDATE IV: State Rep. David Meeks passes along a cache of the original page with the statistics that AID took down from their website rather abruptly today.

One thought on “Another Round of Obamacare Rate Hikes Coming”