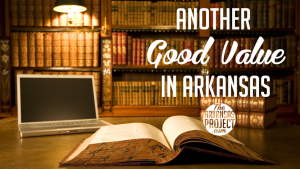 The title of this article is absolutely true, but also a bit of marketing, which, I feel as an academic, I must forthrightly disclose.  Richard Sander and I just released the first working draft of our article on the “mismatch phenomenon.”  Therein, we specifically show, for the first time using individual-level data, the negative effect on bar-exam success for those students going to a law school whose class has a median LSAT score (and undergraduate GPA) well above theirs.
This idea — that being a fish-out-of-water has a negative effect — is not theoretically challenging.  As an Arkansan, I know it’s true for actual fish!  But it is politically challenging to those who want to, and do, offer very large admissions preferences to various (and sometimes changing) groups, because this “gift” may turn out to be an unintentional Trojan horse.
For our research, we examined three schools that we will identify later.  Two of the schools are in California and one in Arkansas.  We are considering a variety of factors on bar passage:  the mismatch phenomenon, LSAT score (and in two of the schools, the undergraduate GPA), the ability of the school to teach students to pass the bar (what can be called the institution effect, which does not simply track school ranking — i.e., otherwise lower ranked schools can do a better job, all else held constant, at preparing students for the bar exam), and the difficulty of the state’s bar exam.
The research demonstrates that the mismatch phenomenon is real in its depressing effect.  And race is not an independent factor in bar success.  Let’s repeat that:  race is not an independent factor.
So, discussions in states, including California, about how to improve minority bar passage that focus on the “cut score” (the pass score) for a bar exam will not address the disproportionate failure rate of certain cohorts.  Of course, if a state lowers it pass score, percentages of all groups passing will most likely increase.  But that won’t address differences in pass rates among cohorts.
Here’s what we know now:  for those students with non-superlative scores who want to take the in-state bar exam of where they attend law school, if they’re better matched with the median credentials of the Arkansas law school over either of the higher ranked California schools investigated, they’re better off going to the Arkansas school!
If you’re deciding between the two Arkansas law schools, I recommend you also consider where in the class your metrics put you.  For the purposes of passing the bar, neither school is inherently “better.”  The appropriate question is which school is better for you.
Now that we know that the mismatch effect is real, the next step is to analyze data from more schools.  That will require greater transparency from schools across the country regarding their admissions practices and bar results.  Everyone benefits if we can increase the success of law students.  I hope we all can openly pursue that laudable goal.
Please follow and like us: