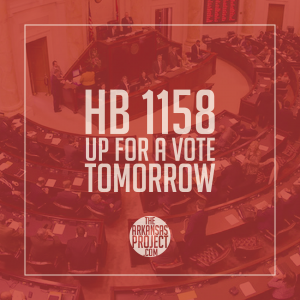 As we mentioned last week, state Rep. Richard Womack’s “Right To Seek An Honest Living” bill has attracted the attention of hordes of special-interest groups which are now fighting to stop it from becoming law.
One of those special interest groups, the Arkansas Bar Association, has been particularly outlandish in its fear-mongering recently.
Brian Ratcliff, the president of the Arkansas Bar Association, said in an e-mail to bar association members:

The (Bar Association) Legislation Committee has voted to oppose this bill due to concerns about the devaluation of the license to practice law and implications on the unauthorized practice of law.
Please consider contacting your Representative today to advise them of your opposition and why this is a dangerous bill.

There is a big problem with Ratcliff’s statement: Womack’s bill exempts fiduciaries (like lawyers, CPAs, and Realtors) from its scope. That means that the bill would have no effect whatsoever on lawyers, and that Ratcliff has discovered a problem that doesn’t exist.
(Just to recap, what Womack’s bill does is give citizens a way to challenge existing occupational regulations in court. It creates a defense to a regulatory enforcement action, so its real force is to make regulators pull back, check themselves, take a second look at their actions, and/or ensure that their regulatory enforcement remains inside reasonable boundaries.)
However, since fiduciary occupations are exempted in the bill, Ratcliff’s concern about a non-lawyer suddenly waking up one day after binge-watching Law & Order reruns and attempting to practice law isn’t based in reality.
I found it hard to believe that Ratcliff seriously thought lawyers wouldn’t qualify as fiduciaries under the bill, so I e-mailed him the questions below about the bill:

This was a puzzling response in several respects, primarily because I hadn’t supplied an interpretation of a fiduciary. All I had done was send him some questions which (I admit) I thought had obvious answers. I’ve watched a few episodes of Law & Order myself, so I know that lawyers have special professional responsibilities to their clients. So I thought I’d get a second opinion and ask AAI President Dan Greenberg whether lawyers are fiduciaries. His response:

Of course lawyers are fiduciaries. That isn’t just my opinion; it is a basic rule of law, as well as the opinion of the state Supreme Court. “No rule of law is more firmly established than that a fiduciary relationship exists between attorney and client, and the confidence which the relationship begets between the parties makes it necessary for the attorney to act in utmost good faith.” That’s from a 1979 state Supreme Court case, Sikes v. Segers, quoting a much older Supreme Court case from the 1920s. I do not think this is a hard legal question.

So, to sum up, it appears that Brian Ratcliff — the president of the state bar — has an unfortunately loose understanding of the nature of his own professional duties, and, indeed, a loose understanding of the professional duties of all the lawyers in Arkansas. This becomes even more of a problem when Ratcliff purports to advise others on what to vote for and how best to write legislation. Maybe someday he’ll get back to me about what he doesn’t like about my interpretation — as of press time, I’m still waiting.

The House vote on this bill comes up soon. Hopefully, legislators will vote on the facts of what the legislation actually does — and not on fear-mongering from low-information representatives of special-interest groups.