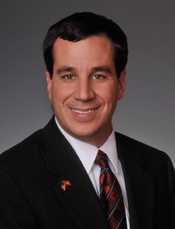 My latest in a series of fantastic interviews with state legislators about their plans for the upcoming session (if I do say so myself) is a conversation with Rep. David Meeks (R-Conway). (Click here to read other interviews from this series).

Meeks, an AAI Friend of Freedom, is entering his second term in the Arkansas House. His stated goals for the session are “to continue to advance the conservative agenda that I promised to my constituents.” That sounds all well and good, but what does it really mean for Arkansans who are anxious to see how the new Republican majority will govern?

“With everything going on in Washington DC, it is critical that Arkansas becomes less dependent on the federal government and also be willing to stand up to them when they go beyond what the Constitution says.”

How do we do it? Legislatively and through spending restraint, says Meeks:

“We can pass a resolution similar to what Oklahoma has done, look for ways to stop spending federal dollars that come in, and pass legislation that protects Arkansans and Arkansas businesses from federal regulations that are in violation of the Constitution such as the contraception mandate.”

Oklahoma passed a sovereignty bill in 2009 that told the federal government to “to cease and desist, effective immediately, mandates that are beyond the scope of these constitutionally delegated powers.”

With regards to Medicaid reform, Meeks says Florida’s reforms are a model for the approach Arkansas should take:

“Florida has had some success in the pilot program they have set up in 5 counties. Things such as more patient choices, incentives for patients who take preventive measures and comply with maintenance and disease management programs, and opting out of Medicaid coverage and choosing private coverage when it is cost effective for the state.”

(Advance Arkansas Institute has written extensively about Florida’s approach to Medicaid reform in their new Action Plan for Arkansas, starting on page 37.)

As for continuing to try to block Obamacare’s implementation, I asked Rep. Meeks if this was still a realistic goal (see my report from last month about the legislature’s acceptance of an $18.4 grant to fund Obamacare exchanges). He said there is still hope that implementation can be stopped:

“All [the December 21st vote] did was allow exchanges to be funded until June 30th, 2013. Any appropriation that is passed through the legislative council is just to get to the next budget year. The new insurance budget starts July 1, 2013. ”

Meeks said that although the grants have now been accepted from the federal government, they do not have to be appropriated or allowed to be spent in the Fiscal Year 2013 budget. He anticipates much more debate on this issue when the full legislature convenes this month.

One last item on Meeks’s agenda is human trafficking legislation. Meeks wants to see penalties increased to match those of drug-related offenses, including jail time, fines, and possible seizure of assets for those who traffic people in Arkansas.

Stay tuned to The Arkansas Project for more interviews with state legislators and extensive coverage of the upcoming legislative session!