The following is a guest editorial by Jonathan Ingram of the Foundation for Government Accountability: 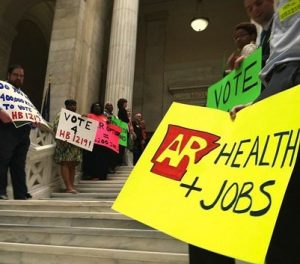 You may have seen the latest video from Arkansas Advocates for Children and Families. It’s an interview with Jennifer Trader — a working woman living in Springdale, a mother of two children, and an advocate of the private option. Nearly half of the video is composed of quick cuts — images of Jennifer working, or Jennifer playing with her kids. Jennifer talks over those images, explaining how hard she works, and how inadequate her health care coverage is. She tells us that “there’s a lot of us out there who work really hard and cannot afford it no matter how much we try.” Just after that, she says that “the private option is helping my family.”

It’s too bad, though, that AACF’s work is so misleading. The vast majority of private-option clients are nothing like the idealized portrait that AACF has produced.

Let’s remember who actually qualifies for the private option. The private option’s Medicaid expansion does not cover the elderly, or individuals with disabilities, or even poor children — groups most frequently considered among the most vulnerable.

All of us want to help the truly needy. But it is far from clear that non-disabled adults without children fall into that category. They are a demographic group that has never been considered among the most vulnerable: notably, they have generally been ineligible for other types of taxpayer-funded welfare. For example, childless adults are not eligible for cash assistance under the Temporary Assistance for Needy Families (TANF) program, nor are they eligible for long-term food stamp benefits under the Supplemental Nutrition Assistance Program (SNAP).

A 2012 poll conducted by Reuters found that most Americans want to preserve safety-net programs for the truly needy – but the idea that the typical private-option client is truly needy is far outside of the mainstream. Note that 77 percent of those Reuters polled opposed non-cash assistance, such as food stamps and Medicaid benefits, for working-age adults without children.

Sure, some parents may ultimately enroll in the private option (while their children are stuck in a Medicaid program on the brink of collapse), but those able-bodied parents make up only a small portion of those who the private option was meant to cover. I guess able-bodied, childless adults don’t generate the pity that AACF’s looking for. If the private option were truly about parents, Arkansas would have followed the lead of states like Florida, which has looked at options for safety-net coverage for low-income parents and disabled adults below the poverty line.

I understand why AACF produced this video: the private option is in critical condition. Earlier this week, John Cooper, the winner of the special state-senate election in Arkansas, said that his opponent made the election about the private option – “and obviously,” Cooper said, “it’s been rejected.” Thursday, Arkansas’s Senate President told reporters that he was “terrified” about its future. The private option is an extraordinarily inefficient program that provides very little benefit – and most of that benefit goes to people who are far from truly needy. Explaining why so many Arkansas legislators supported it in 2013 is an exercise best left to the reader. I fear those legislators were making decisions based on the kind of flawed portraiture that AACF provides.

8 thoughts on “AACF: Working to Confuse Voters About the Private Option”