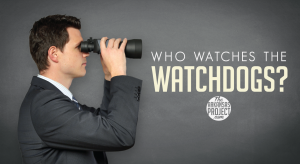 Who watches the judicial watchdogs?

That question has plagued me when considering the ongoing disputes in Arkansas Supreme Court Justice Courtney Goodson’s re-election race.

A group calling itself the Arkansas Judicial Campaign Conduct & Education Committee has set up a Rapid Response Team (RRT) as a vehicle to comment on judicial races. Unfortunately, the RRT appears to be nothing more than an advocacy group trying to dress itself up as an impartial watchdog. At least that is what I conclude after looking at its actions in the Goodson race. This is very similar to a situation earlier this year that we’ve discussed previously on TAP.

At issue are charges made by the Republican State Leadership Committee—Judicial Fairness Initiative concerning Justice Goodson’s ethics. Among the criticisms that the RSLC made against Justice Goodson is that she asked for an $18,000 a year pay raise. The RRT team then sent the RSLC a letter asking it to withdraw its ads because they were “false and misleading.” Then it sent a cease-and-desist letter demanding it do so. However, if you look at the information closely, it appears that neither the RSLC nor the RRT is being completely accurate.

Consider that the RRT writes, “There is no information, nor should there be information, as to whether Courtney Goodson voted for or against requesting a raise,” and that Goodson has a “duty of confidentiality” not to discuss the facts of the matter. There is indeed no definitive information on whether or not Justice Goodson asked for the pay raise that Chief Justice Dan Kemp requested on behalf of all Supreme Court justices. However, there is circumstantial evidence, as the RSLC points out. First, Justice Kemp asked for it on behalf of all the justices. When he spoke for these justices, that included Justice Goodson. Second, Justice Goodson did not refuse the pay raises, which she could have done if she did not believe the raise was justified. Third, she has refused to clear up any confusion about her vote by declaring what it was. In fact, there is no “duty of confidentiality” — this is an imaginary duty, invented out of whole cloth — that would prevent Goodson from saying how she voted. A public discussion of the pay-raise facts by Goodson would not require her to comment on other justices’ votes or reveal anything other than what her action was. If the RSLC is indeed saying something that is false, Justice Goodson can easily solve the riddle of her views on the raise with a simple declaration that she did not vote for it.

In light of these factors, perhaps the RSLC cannot prove that Justice Goodson voted in favor of a pay raise, but it can truthfully say that the evidence indicates that she supported the pay raise. Strangely, however, the RRT responds that “Justice Courtney Goodson did not request a pay raise.” That is as definitive as the RSLC statement, but it is obviously wrong. As the RRT itself acknowledges, there is no information on how she voted on the raise, so saying definitively that she did not request one is completely false. Using the RRT’s own logic and its own words, the RRT itself is disseminating “false and misleading” information.

I e-mailed the RRT (specifically Audrey Evans, Retired U.S. Bankruptcy Judge) to ask about these issues. I specifically asked about where the duty of confidentiality comes from and about how they can declare a statement false when there is a lack of information about its veracity.

This was her reply:

Your request for information is not an education inquiry, but rather, it raises substantive issues related to the mailed flyers. Given the structured nature of our process, which give the parties involved an opportunity to respond before we make our findings, we cannot address these types of questions from you or other entities once we issue findings.

That’s fair enough, I guess. She certainly has no obligation to answer my questions. But that leaves the confusion over how the RRT came to conclude that there is a “duty of confidentiality” that supposedly forbids Justice Goodson from revealing how she voted on a pay raise. It also leaves unanswered the confusing situation where the RRT deems the statement that Justice Goodson voted for a pay raise as “false” based on lack of information, then confidently declares that she did not vote for that raise. Again, Evans has no obligation to answer my question, but behavior like hers also underscores the fact that nobody has the obligation to take her (or her group’s findings) seriously.

I should add that Evans’s response to my question is an interesting response, but it is interesting precisely because it is unserious and unprincipled. The Rapid Response Team has put out a statement saying that it has found an ad unacceptable because it contains false statements. When I asked its chief what was false, it responded that it was prevented by its “process” from answering questions. That’s very convenient, but the constraints that its “process” makes are manufactured. Evans’s refusal to explain her group’s reliance on non-existent concepts (such as, for instance, Goodson’s duty of confidentiality about her pay raise) demonstrates that the Rapid Response Team is anything but an educational enterprise — demonstrably, people who read the Rapid Response Team’s statements will be more poorly informed than they were before.

In light of what the RRT has written, and in light of its chair’s refusal to clarify the RRT’s confusing stance, this situation indicates one thing to me – the RRT is not a neutral arbiter of facts in this case. This self-appointed watchdog group is playing an advocacy role. That is fine; in an election, there are plenty of advocacy groups trying to influence the public. However, when the RRT dresses itself up as an unbiased organization and starts issuing cease-and-desist letters as if it is some sort of legal body, then this highlights what I said above. To repeat, there is no reason to take the Arkansas Judicial Campaign Conduct & Education Committee or its Rapid Response Team seriously. If they really wanted the public to be better informed, they would cease and desist from their own operations immediately.