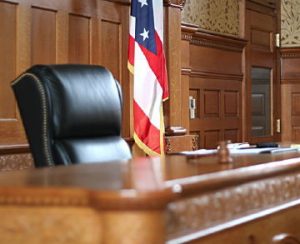 In the past, I don’t know that enough people have paid attention to the race for a Supreme Court judgeship between Tim Cullen and Robin Wynne. This last week, I think just about everybody learned that Tim Cullen is the better man.
The “Law Enforcement Alliance of America,” an advocacy group which refuses to disclose its leadership, is spending hundreds of thousands of dollars on television ads which accuse Tim Cullen of representing a criminal defendant on appeal.
I’ve never represented anyone who’s been accused of a crime. But that kind of work is important and necessary. We all know that some people accused of crimes are guilty as sin. But sometimes we forget that that some of the accused are innocent, and that every criminal defendant is entitled to a defense. The right of the accused to a defense is a federal constitutional guarantee that is of tremendous aid in resisting oppressive government. And when we forget that, we risk becoming a society where corrupt prosecutors can commit misconduct and railroad the innocent for political gain.
I am saddened that I know otherwise intelligent people who, at some level, believe that everyone who has been arrested is guilty of something and deserves imprisonment. This prejudice is a startling and dangerous idea that should be resisted. My very brief look at Cullen’s work suggests that far less than a tenth of it is devoted to criminal defense. LEAA’s suggestion that someone who does any criminal defense work is therefore an accomplice to or an enabler of criminal conduct is poisonous and un-American.
I find LEAA’s injection of such ideas into Arkansas politics offensive, as a lawyer – and I think everyone who knows anything about the Constitution should find LEAA’s conduct offensive, as an American. Wynne has been vocal about the fact that he isn’t the author of these ads. But when he’s asked about his evaluation of them, he has – just a little ironically – exercised his right to remain silent.
Robin Wynne’s refusal to repudiate these ads suggests a high tolerance for bad ideas that eat away at the foundation of our legal system. That is a troublesome posture for a judicial candidate. Wynne’s conduct makes me think he should be kept far away from the bench.

4 thoughts on “A Note On Cullen Vs. Wynne For Supreme Court”