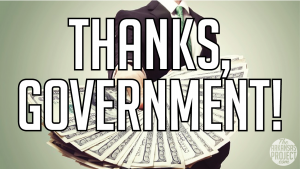 Arkansas giving away state taxpayer dollars to private companies who promise to create jobs is nothing new.

Yesterday, however, the state went a step further in the wrong direction.

The Arkansas Economic Development Commission (AEDC) announced this week that DBG, a Canadian company, would be opening up its U.S. headquarters in Conway. DBG purchased IC Corp.’s plant in Conway; it will manufacture custom metal parts for its customers.

I want to give DBG a hearty welcome to Arkansas, and I wish them the best of luck in their endeavours.

Unfortunately, it’s not clear that this announcement will lead to any new jobs. According to Arkansas Online, DBG will keep the 200 employees that were already on IC Corp’s payroll.

Normally, how many people private companies choose to hire would be none of my business. DBG, however, is getting millions in state and local “incentives” for moving their U.S. headquarters to Conway.

The company also qualified for two years of Create Rebate incentives. Create Rebate provides annual cash payments based on a company’s annual payroll for new, full-time, permanent employees. In order to qualify, the company must create a minimum of $2 million annually in new payroll. The minimum payroll must be met within 24 months of the effective date of the financial incentive agreement. No benefits may be claimed until the $2 million annual payroll threshold is met.
Create Rebate benefits are available after the business certifies to the Arkansas Department of Finance & Administration that it has fulfilled the minimum payroll requirements and the reported payroll has been verified. The percentage of the benefit depends on the tier assignment of the county where the job creation occurs. Faulkner County is a Tier 1 county, so the benefit will be 3.9% of new payroll.

AEDC is counting the existing 200 employees already working at the plant in Conway as “new payroll,” according to Arkansas Online.

To sweeten the deal even further, the Conway City Council voted to issue $5.2 million in bonds to aid DBG in the purchase of the plant.

Arkansans are known for their hospitality. If you’re DBG right now, you’ve got to be feeling pretty welcome in the Natural State — especially with all that taxpayer help!
DBG is essentially getting millions in taxpayer incentives to keep existing employees, but it’s highly unclear whether they’re actually creating new jobs.

AEDC Director Mike Preston does mention in a statement that the company is considering “additional growth opportunities” but didn’t promise any specific numbers for new jobs.

The “Create Rebate” and similar incentives were created in order to reward companies for creating new jobs in Arkansas. Reasonable people can disagree over whether this is a proper role of state government.

This DBG deal does a disservice to Arkansas taxpayers by giving away these incentives for no increase in new payroll.