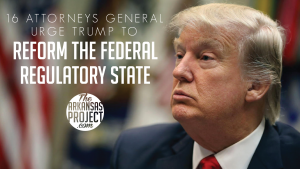 We recommend that you call on Congress to pass legislation clarifying that regulatory agencies have no power to enforce their will in federal court unless the enforcement action is based on a federal law. In other words, federal agencies may not enforce rules, interpretations, guidance documents, bulletins, circulars, or any other administrative statement or action of any type or form in federal court. After decades of deference, there are now volumes of federal rules and informal agency statements. The legislation could require federal agencies to send their rules and rule-like documents to Congress for review. Further, the legislation could set forth an agency-by-agency timetable, and leave all current regulations in place pending congressional review. The review process could begin with agencies whose rules have not been the subject of much litigation and may therefore be codified without much effort.

…
In sum, the existing regulatory approach presents an enormous problem for private individuals, businesses, and State Attorneys General, irrespective of political affiliation. When federal agencies have virtually full control over the law, power is concentrated at the federal level. And the party that controls the executive effectively runs the nation — from what’s taught in the nation’s schools to the way our businesses are managed.

Arkansas Attorney General Leslie Rutledge said the legislation is needed due to Arkansas individuals and business not being protected “under the current (regulatory) structure.”
Rutledge said in an emailed statement:

As I travel Arkansas, I hear loud and clear from Arkansans that they are burdened by the unlawful regulations put in place by bureaucrats in Washington, D.C.,” said Attorney General Rutledge. “While my colleagues and I have challenged these rules and regulations, what is truly needed is bold reform of the regulatory process so that these lawsuits are the exception – not the norm. Individuals and businesses are not protected under the current structure and that must change.

According to a report by the Competitive Enterprise Institute (CEI) released earlier this month, the cost of all these federal regulations was $1.9 trillion last year, or about $15,000 per household.

A resolution endorsing the “Regulation Freedom Amendment” failed to pass the Arkansas legislature in the 2015 and 2017 sessions. The resolution would have required a majority vote by Congress to pass a regulation after a written objection from one-fourth of the U.S. House or Senate.

You can read the Attorneys General’s full letter here.