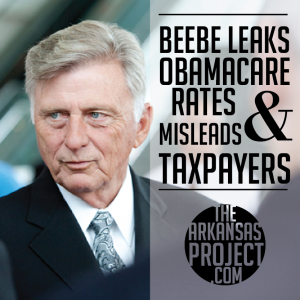 Governor Mike Beebe, and other private option advocates, would have you believe that everything is going swell for the program — especially after the prices for the 2015 exchange policies showed a slight net decrease.
One Republican backer of the private option recently told the Arkansas Times:

This is good news. These are early indications of what our costs will be in 2015 for the private option and these are lower than what we anticipated, both in our planning and what was approved in the waiver. We are seeing that not only lower-income Arkansans can participate in health insurance markets, but, if done correctly, they can actually have a positive impact on health insurance markets.

But as our friends at the Foundation for Government Accountability (FGA) note, that doesn’t exactly tell the entire story.
From their most recent Forbes post:

We’ve previously highlighted that the Private Option has run over budget every month it has been in operation. But one important thing to remember is that the state is actually culling out the most expensive enrollees and dumping them into the traditional fee-for-service Medicaid program, which doesn’t show up on the Private Option ledger. So far, more than 20,000 individuals who would otherwise qualify for the Private Option have been shunted into regular Medicaid. Enrollees who later become higher-cost patients are removed from the Private Option and placed into traditional Medicaid.
These costs, while a significant part of the ObamaCare Medicaid expansion, simply don’t show up in the spending numbers Arkansas tracks for the Private Option. Without knowing what’s happening with this off-ledger spending, it’s impossible to get an honest picture of how much ObamaCare expansion is costing taxpayers. Gov. Beebe is trying to distract voters with a partial snapshot of just one aspect of the program, hoping that they don’t notice the full picture paints a very different story.

Got that? State officials are able to keep private option plan rates lower by skimming the cream — and dumping the most unhealthy and expensive customers onto traditional Medicaid. That’s happened to 20,000 individuals so far.
I expect we’ll continue to hear more about the unexpected costs of the private option — but, as the FGA folks note, that will likely occur after the elections in November.
For more on the private option, read our coverage of the recent Government Accountability Office report, which said the plan “raises cost concerns” for the federal government.