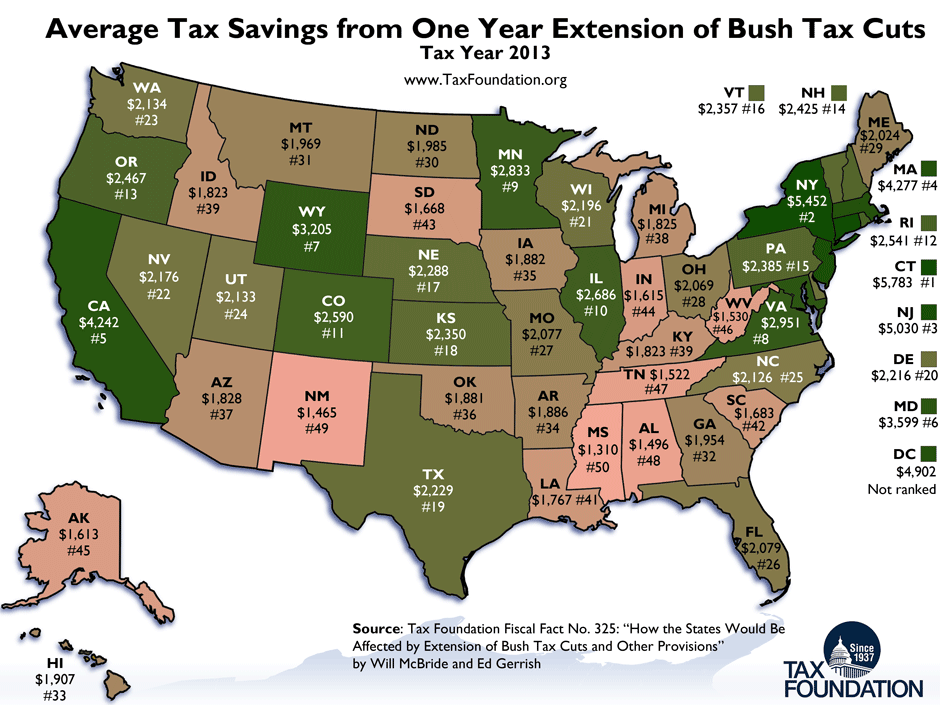 I spent yesterday morning at the Department of Finance paying $500 in sales tax on my new (used) vehicle and registration fees.  So yes, let’s talk about tax policy!

We don’t spend a lot of time focusing on federal tax policy here at The Arkansas Project–our focus is mainly state and local issues.  However, our friends at the Tax Foundation have released some new figures about how the extension of the so-called “Bush tax cuts” will affect people in the 50 states (figures shown in the map above).

As you can see, every Arkansan would save $1,886—per year–on average if Congress extends the cuts and the Alternative Minimum Tax proposal, a provision for more wealthy Americans.  Removing the AMT provision, average Arkansans would save $1,209 per year, as shown in Table 1 of the Tax Foundation’s report.  This savings is fairly evenly distributed over average Arkansans and amounts to 2.6% of Arkansans’ income.  In total, Arkansas taxpayers would save $1.48 billion.  If Congress fails to extend the cuts and raises taxes, Arkansas taxpayers can expect to see their tax bills increase by these same amounts.  This is very significant.

Now, opponents of the tax cuts are going to say that “these are really just extensions of existing cuts–FOR THE RICH!”  Or, in all of their budgetary genius, they will say that “we need to let the cuts expire because they’re adding to the deficit and the debt!”

The problem with their “logic” is threefold.

First of all, these aren’t just “tax cuts for the rich.”  The majority of the Bush tax cuts provide a lot of relief to average Americans, as previously noted.  No amount of demagoguing on this issue will change the facts:  You can see in Table 2 that the cuts provide $30.7 billion in tax relief to those in the 10% tax bracket.  Other components that help middle and lower class Americans include the child tax credit, marriage penalty relief, dependent care tax credit, adoption credit, and education relief.  These aren’t luxurious tax goodies for the so-called “rich,” as liberal pundits in Arkansas would have you believe.  This is relief for you.

Secondly, debt, a product of deficits and borrowing, is not accumulated through tax cuts.  Debt is accumulated through spending.  If a liberal tells you they want to raise taxes to lower the debt, ask them how much their raise at work (assuming they’ve ever gotten one) cost them.

Thirdly, we don’t have a revenue problem in this country–we have a spending problem.  Revenues have remained relatively constant over the last few years:  even if the tax cuts are made permanent, federal revenues are projected to remain around 18% of GDP in the next decade, slightly above our nation’s historical averages.  But spending has been skyrocketing at an unsustainable level and it is projected to continue.  If liberals really believed we had a revenue problem, they would support the tax cuts because lowering taxes will lead to higher revenues.

Unfortunately, no amount of tax increases will satisfy our federal government’s insatiable appetite.  The more they get, the more they will spend–or, as we have seen in recent years, they’ll spend more even if they don’t get it.  To believe that higher taxes will solve our fiscal problems borders on delusion.

Economic freedom, lower taxes, and lower spending are the only way to solve our fiscal problems.  Renewing the Bush tax cuts is a good step in that direction–a step that will save Arkansas taxpayers more than a billion dollars per year.

Be sure and check out the Tax Foundation’s Tax Policy Calculator to see exactly how much the extension of the Bush tax cuts will save you.

3 thoughts on “Taxmageddon Threatens Average Arkansans, Not Just “The Rich””