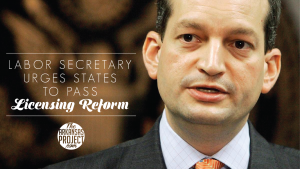 Reforming overburdensome occupational licensing laws is one way state lawmakers can have an “immediate, consequential and measurable impact” on economic growth, according to U.S. Secretary of Labor Alexander Acosta.
Acosta said in a speech to the Western Governors’ Association yesterday:

The financial costs are obvious; some licensing applications cost thousands of dollars. The cost in time is at least as high.  The national average time required for a cosmetology license is 370 days.  In one state, it is 490 days. For Americans living paycheck to paycheck, investing time and money into licensing is a substantial burden.
Americans want principled, broad-based reform.  If licenses are unnecessary, eliminate them. If they are needed, streamline them. And, if they are honored by one state, consider honoring them in your own state.

This advice is particularly pertinent for Arkansas lawmakers.

According to the Institute for Justice (IJ), Arkansas has the second-most burdensome occupational licensing laws in the nation.

Richard Womack has spent the past two legislative sessions trying to pass legislation that would help fix many of the problems Acosta highlighted with occupational licensing.

Unfortunately, his legislation never made it out of the Public Health, Welfare and Safety committee.

Arkansas lawmakers often (rightfully) complain about all of the mandates and directives being handed down from the federal government. However, Arkansas would be well served by taking Acosta’s advice on occupational licensing reform