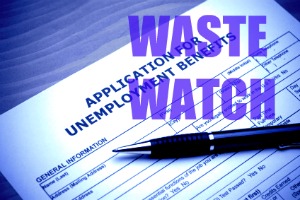 A worthy addition today to the “Just How Much Damn Money ARE They Wasting?” genre from Alison Sider of the Arkansas Democrat-Gazette: Sider follows up with state Dept. of Workforce Services (DWS) officials on the question of some $161 million in improper unemployment payments made over the last three years. Surprise! They say it’s not that much (subscription required).

That’s a lot less than $161 million, the amount of improper payments as determined by the U.S. Dept. of Labor, but still a huge amount of money to just have walking out the door.

But does the lower figure represent a reliable accounting? I’m betting probably not.

Two points about that little smokescreen:

1) You know where else we use sampling and estimates? When calculating the unemployment rate. And the consumer price index. And about a million other things. Sampling is pretty much the cornerstone of the entire field of data collection, as well as public opinion and political polling.

Because it turns out statistical sampling delivers a typically reliable snapshot of the whole, when conducted properly. Sider’s story deftly underscores this point by interviewing an expert with the National Opinion Research Center, who explains how sampling can be and is “a valid way of drawing inferences about a population.”

2) Sampling and estimates are even more necessary when looking at questions of waste, fraud and abuse, because these are things that, by their very nature, are not transparent. You don’t just open up an Excel spreadsheet of unemployment benefits payments and scroll over to the “Waste, Fraud and Abuse” column to see how much there is.

That’s a long way of saying that Workforce Services is going into desperate spin mode in hopes of making this story go away, or at least confusing the storyline. Legislators with oversight responsibility for the department shouldn’t let them get away with that.

I’m willing to believe the $161 million figure in improper payments the feds identified may be too high—the actual number may very likely be much lower, once it all shakes out.

But it’s going to be much, much higher than this $23.8 million figure that state officials are trumpeting after what must have been an exhaustive four-day review of three years worth of claims. Mark it.