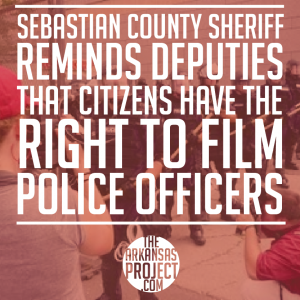 Another law enforcement agency was in the news recently after it paid the cost for attempting to restrict the right of citizens to film law enforcement.
After a Sebastian County Sheriff’s Deputy agreed to accept a $40,000 judgement against himself for, apparently, arresting a citizen who was filming cops executing a search warrant, the Sebastian County Sheriff’s Office decided it needed to remind its employees about a little ol’ thing called the Constitution.
From Arkansas News:

Following a lawsuit that claimed a deputy arrested a man for filming law enforcement executing a search warrant, the Sebastian County Sheriff’s Office adopted a written policy on how deputies should respond to people recording/videoing deputies. The four-page policy reminds deputies that citizens have the First Amendment right to film or take video of law enforcement activity in a lawful manner, and they are prohibited from: attempting to intimidate or coerce someone into ceasing, obstructing their ability to do so, or even discouraging them from engaging in recording law enforcement.

According to the article, there appears to be a dispute over what happened between the Sheriff’s Deputy and Braden Purcell who was arrested in February 2013.
From the article:

Both men claim the other was immediately aggressive; both men claim the other tried to hit him. Neither Purcell’s nor Fuller’s account was 100 percent corroborated by other law enforcement at the scene. In his initial incident report, Fuller claimed Purcell walked past the residence twice, taking video with his cellphone.“It appeared he was targeting undercover officers and prosecutors on the scene,” Fuller wrote. “Not knowing if the man was associated with the residence and possibly gathering intelligence for the organization being searched, I requested identification from the man.” Fuller wrote that Purcell started yelling “I know my rights” and “attempted to flee,” refused to stop, refused to produce identification, refused to submit to arrest, actively resisted, had to be “physically placed in handcuffs,” and was taken into custody for obstruction of governmental operations and resisting arrest.
In a supplement to the initial report, Fuller wrote that he observed a man who looked “very similar” to Purcell leaving the residence before the warrant was served, which “raised my suspicion” about Purcell. During an internal Sheriff’s Office investigation, Fuller said he was “highly confident” he saw Purcell leaving the residence before the warrant was served, according to a report detailing the findings of the investigation.
While being deposed for the lawsuit more than a year later, Fuller said Purcell first came to his attention when he walked out of the target house and got in a vehicle.Fuller had no evidence to corroborate that Purcell was seen leaving the residence and Purcell denied ever being there in his deposition and an interview with the Times Record. Although Fuller described Purcell as immediately “belligerent” when he asked for identification, Purcell claims Fuller was immediately aggressive and demanded his phone and identification, according to Purcell’s deposition. When Purcell refused and told Fuller he was recording him, Purcell said Fuller swung at the iPhone — trying to grab it or knock it out of his hand — and then grabbed his other arm, threw him to the ground, other officers responded to the situation, and Fuller yelled at them to get the phone.

Gee, I wonder what device could help us figure out what actually happened? A video recording would almost certainly have helped to shed light on the facts.
We urged legislators in 2013 to pass legislation that would protect citizens’ recording and filming rights.
From Advance Arkansas Institute’s Action Plan For Arkansas (pages 65-68 at link):
In order to protect our citizens’ already established constitutional rights, the legislature should move to protect (and eliminate the ambiguities surrounding) every citizen’s First Amendment rights to make audio or video recordings in public.
Dan Greenberg, AAI President, wrote about another case which shows the need to protect citizens’ right to record a few years ago.